Can learning French can make you sexier? 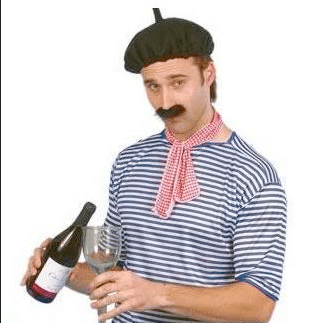 These days everyone speaks English, right? So is there any point in learning French?

MAIS BIEN SUR!  There are a huge pile of reasons why learning French is awesome. We’ve created a list of our top ten:

Sounds obvious right? But with over 115 million people in the world speaking French, just think how many conversations you’re missing out on by just talking in boring old English.

Again, common sense, but if you travel to a foreign country and make the effort to speak the local language, the natives will generally be delighted. Even if you’re crap (unlikely if you learn with VoulezVouloz), they’ll usually be pleased you made the effort – and might even put an extra bread roll in the basket.

Have you ever had someone whisper ‘qu’est ce que tu sens bon!’ in your ear? Sexy right? Speaking French is hugely attractive to the opposite sex. You could just read some people a shopping list in French and they’d get a bit giggly. So if you want to impress, wrap your vocal chords around a little Français.

If you’re a bit apprehensive when it comes to going overseas, learning French will boost your confidence. French is the official language in 29 countries and a second language in heaps of others, fancy a trip to Vanuatu, Vietnam, Tonga, New Caledonia, Tunisia, or the Seychelles? With improved French speaking you’ll be packing your passport in no time.

Scientists have proven that people who learn a second language in their latter years are less likely to suffer from dementia or other mental illnesses. Think of learning French as a boot camp for your brain. So forget about playing Bridge and going to seniors’ dances, book a lovely French teacher to come to you and revive those tired brain cells


Are you sick of meeting friends and having the same boring conversations? Learning a language can give you a whole new lease of life. You’ll learn things you never knew and become a veritable mine of information about all things French for your friends, so, Learning French can improve your social life.

It’s a proven fact that children who learn a language at a young age (and grow up bi- or tri-lingual) have a distinct academic advantage in later life. Start them young and make it fun. VoulezVouloz has heaps of French tutors, all with years of experience teaching children of all ages, and if you learn with them, it can become an activity for the whole family to enjoy.

Imagine if you could watch that French movie without having to give yourself a headache squinting at the subtitles? Learn French and you can enjoy the movie and let your ears do the work.

9)    The world will become your lobster

The French are known for their food, and learning the French language will give you a new appreciation of all things culinary. No longer will you be intimidated by menus in fancy French restaurants. Instead, you can translate for your friends and knock their socks off.

There is some simply splendid French music out there. From the classics like Serge Gainsborough, Gilbert Bécaud, Sacha Distel and Tino Rossi, to more modern musicians like Camille, Malajube and Mathieu Chedid . Improving your French will mean you can enjoy not just the melody but the ‘mots’ as well

So if you want to be sexier, cleverer, less demented and more popular, isn’t it time you learned French?

Tell us, what are you reasons for learning French?