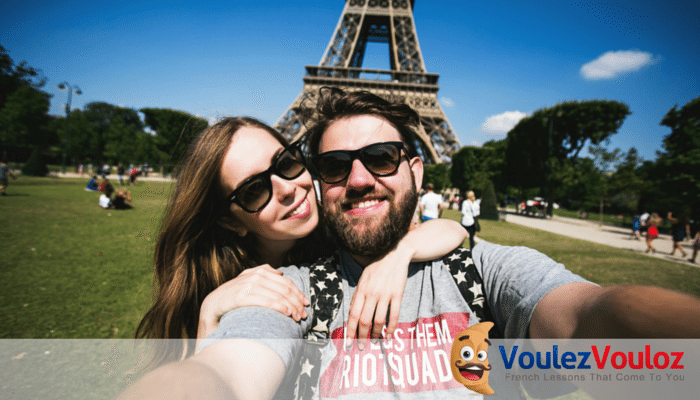 Here are some more fantastic and funny French facts! 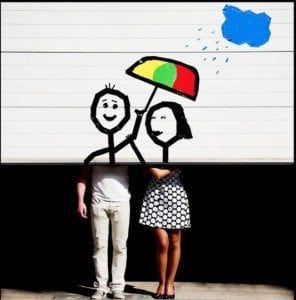 Ever wanted to know how many ways you can say “I don’t care” in French? Well there are heaps, from the least offensive to the rudest. Here are just 3; Ca m’est égal (mild) – Je m’en fiche (mid-range) – Je m’en fous (crude) Which one will you use today? 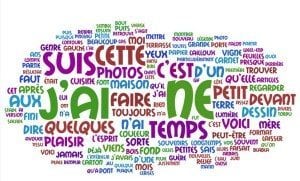 Many people sing in the shower, and often think they sound angelic, oui? If you need to tell someone that they sing horribly and must not give up their day job, tell them ; “vous chantez comme une casserole!” (you sing like a saucepan) and stand back, they may be holding one!!!

Keeping the beast out

Did you know that quarantine is derived from “quarantaine” which means fourty-ish? 40 days was the original amount of days foreign creatures /people were isolated for before they were deemed safe to be let out into the public. This word goes back to the 17th century.

Cedilla? Cedilla? What on earth is a cedilla? Well the letter c in French sounds mostly like a hard KKK (cravate/capotte/carotte) Turning a c into a ç often softens it to an SSS sound (garçon/façon/maçon) Easy as une deux quatre! Sort of… 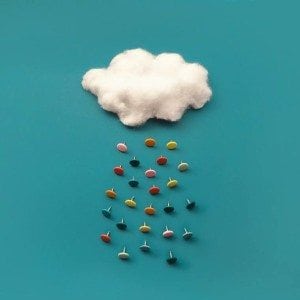 Ever catch yourself about to swear and end up using another word just in time? “shhhugar” instead of “shhh**” for instance? We have something similar in French, instead of exclaiming “putain!”(whore!) when we’re angry we may say “punaise!”(tack!) Not quite so offensive;-);-) 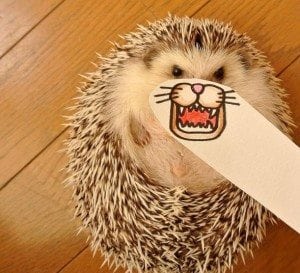 Have you noticed how words like hungry and angry, said by a French speaker, sound the same? This is because someone stole our Hs, and so even if it’s on the page, we still struggle. I’m not ‘appy coz I’m ‘ungry and ‘angry! If you really want to be CRUEL, get a French person to say hedgehog

”Cul-de-sac”. You’ve heard this before? Sure you have… It means a residential road that comes to an end with houses crowded in a loop, yes? Well, word for word, this actually means “bottom of the bag” implying the end of the line. Sounds a little less appealing, somewhat….

Fiona Muir
22:48 03 Mar 20
Fantastic tutors! We learned so much and will be back learning with VoulezVous once we are back from our trip!

Molly Turpie
10:08 03 Jan 20
I took French lessons with VoulezVouloz for 6 months during my time in Sydney for an internship. I am 19 years old, with a crazy work schedule and... hate to sit in a classroom; I needed a French class that could work around this... VoulezVouloz did! I saw my tutor Audrey for 4 hours every week for six months at different times that fit around me, sometimes at 8am and sometimes at 10pm! I really wanted to learn French because I attend university in Switzerland and although my classes are in English, French would really help with the lifestyle. Now, I'm back in Switzerland and my French continues to improve! What I learnt with Audrey helped by to gain confidence to speak to my friends in french, order in a restaurant, take an uber and understand french texts and emails!!!! I would highly recommend not only my tutor Audrey but the whole VoulezVouloz company. Audrey was more a friend than a teacher so it made learning fun and easy.read more

Rhiannon Bice
01:12 20 Nov 19
Top-notch tutoring. I have been with VV for 18 months and it's fantastic, my French has improved out of sight. I appreciate that the tutors come to... you and mine thankfully can work around my irregular work schedule. Nothing but high praise for my excellent teacher, I love my lessons.read more

Nicola Corcoran
07:59 09 Nov 19
Voulez Vous is the perfect option for me since I have lived in France and speak French fairly well. My weekly sessions with my Prof keep me up to... date. Elle est très sympa; we meet in a cafe over coffee and really we just chat although she does her homework and sends me an article to read in advance to kick off our conversation and any notable vocabulary from the previous session. The admin staff at Voulez Vous are also highly efficient and a pleasure to deal with. Highly recommend Hichem and his team.read more

Ella Roby
22:21 05 Nov 19
I highly recommend VoulezVoulez - our tutor Emeline has been wonderful with my 6 year old daughter. Our lessons are packed with reading, writing,... conversation, games and songs. We're learning so much, gaining confidence and having heaps of fun. We look forward to our lessons every week!read more

preeta philip
10:14 05 Nov 19
VV has been great. The tutors are knowledgeable and patient. They work well with the students’ requirements. They are firm but friendly. Well managed... with quick step-in to cover tutor absences. Highly recommended.read more

Andrea Natoli
05:08 05 Nov 19
I am delighted at being a student with VoulezVouloz. Their service is easy, convenient and very flexible. My tutor Marjorie is sensational! She... combines different learning styles, which are fun and engaging, to help me understand the concepts and learn something new in every lesson. I have learnt more and been more engaged with learning French than ever before. I would absolutely recommend learning French from the team at VoulezVouloz.read more

Jenny Morris
22:01 29 Sep 19
Thank you Hichem for introducing me to my tutor, Bonaventure. Despite difficulties getting to my home by public transport, Bonaventure was always... punctual and flexible if I needed to make changes in our schedule. He is a wonderful and very interesting person and I feel very lucky to have met him and to have him as my tutor.read more

Trevor Gray
03:17 15 Sep 19
My tutor Lavinya is brilliant. She has helped me markedly improve my French & has been very encouraging and supportive as I struggled to gain... confidence speaking French. I highly recommend VoulezVouloz and Lavinyaread more

Lynton Taylor
01:54 10 Sep 19
We cannot speak highly enough of the service provide by VouleVouloz or the tutor provided for our two grandchildren in French for the past few years.... Always courteous and efficient. Hugh the teacher has been excellent leading to our eldest topping his years, awarded student of the year and prize from the French Government. He has been selected to teach English at the French exchange school he attended. Highly recommendedread more

Jennifer Mulheron
00:21 14 Aug 19
I’ve been learning French with VoulezVouloz for probably over a year now. I’ve absolutely loved the convenience and flexibility of having tutors come... to my home when it suits my schedule. And all tutors I have had the pleasure of being tutored by have been fabulous - patient, knowledgeable and super approachable and friendly. In particular I have huge thanks to extend to Aurore, my current tutor. Our lessons have evolved from classes on grammar and more “structured classes” to conversation classes because Aurore recognised that I needed to boost my speaking confidence. It’s been super enjoyable and Aurore is now a lovely friend and tutor. I’d like to think that I’ve improved a lot but I’ll let her be the judge haha! I certainly have much more confidence now speaking, writing and reading. Would highly recommend VoulezVouloz to anyone seeking to learn or brush up on their French but who are a bit more time poor and cannot commit to school/classroom based learning (which I’ve also done in the past too and enjoyed thoroughly but the time requirement became too stressful when juggling a demanding full time job).read more

wendy elder
19:59 30 Jul 19
I have had a wonderful time with Audrey, my Voulez Vouloz tutor, the last few months. Audrey has given me the confidence to hold a conversation en... français for the first time. As well Audrey has helped me to understand grammar. I loved learning about the subjunctive. Merci beaucoup Audrey.Wendyread more

Mark Carroll
00:59 14 Jun 19
Audrey tutors my 9 year old daughter Lola each week. Lola really looks forward to her weekly lesson and the two of them have a very good connection.... I can highly recommend Audrey and the VV organisation.read more

Dan Silverman
02:05 13 Dec 18
Excellent business. I heard in the market that this is the place to go if I wanted to learn French. I have not been disappointed. I am very happy... with my tutor (Marie) and I can see the progress I am making. Highly rate this business.read more

Peter Brady
02:44 09 Dec 18
I've been working with my tutors close to my work at Glebe in Sydney and am super happy with the experience. I thoroughly recommend VoulezVouloz to... anyone looking to get professional assistance to learn French.read more

Kate Conigrave
10:51 25 Nov 18
Julia has been a terrific tutor: lovely to work with and great at explaining. (Sydney)

Helen Mulholland
04:25 27 Oct 18
I've been learning French on and off (and very slowly) for many years now via various methods. I feel like what I've done so far has increased my... vocabulary, but as I am travelling to France next year, I really wanted to improve my conversation skills. I recently completed a set of 6 one and a half hour lessons with a VoulezVouloz tutor (Sonia). It was a wonderful experience. Hisham organised everything and the process was easy and the communication great. Sonia was just perfect for me. I felt she understood my needs (and fears!) and I enjoyed every lesson very much. Each lesson included something different and interesting with a nice balance between learning new things and practising conversation. I came away with more confidence and feeling like I had improved. Highly recommended!read more

Hye Rin Cho
21:39 30 Aug 18
I heard about VoulezVouloz through a friend, and overall I had a great experience learning from two different tutors - Yoann and Sonia. Both were... able to travel to the Concord area, which was convenient for me. I would recommend VV to both students and adults who are keen to improve their French!read more

Russell O'Brien
11:15 15 Jun 18
Alannah’s French has come along leaps and bounds since working with Maite. The sessions have been fun and “expressive” and all aspects - vocabulary,... grammar & pronunciation have improved markedly in a relatively short time. Alannah is really enjoying French now. Thanks so much Maite.Russell O’Brien (Alannah’s dad)read more

Freya Appleford
22:07 27 May 18
I had a great tutoring experience with Julia in Camperdown. She was very knowledgeable, easy to chat to and helped improve my confidence and french... speaking skills. An excellent organisation, I would definitely recommend Voulez Vouloz.read more

Maree K
22:03 04 Mar 18
My tutor was amazing and she always took the time to go at my speed when learning new things. She was very personable and always on time to our... lessons which were held in a public library in Strathfield. My experience with Hichem and his team has been amazing and it is because of them I now have a better understanding of French! Can't wait for my holiday, definitely worth it!read more

Melinda Hamby
22:50 31 Aug 17
My son needed help getting caught up in French after an international move. We initially chose VoulezVouloz because the tutor comes to us in the... Queens Park area. It is so convenient! But now I LOVE VoulezVouloz because our tutor, Laura, is magnificent! She is so kind and patient with my son. We did not expect immediate results but he experienced remarkable improvement after just one lesson with Laura. Now, he enjoys his lessons so much that he asks to continue tutoring sessions even though he no longer needs them!read more
Next Reviews